I have it on pretty good authority that IBM has in fact come to terms with GLOBALFOUNDRIES on the sale of their semiconductor business. For those of you who have been following the story, especially the IBM semiconductor people, it has been a real roller coaster ride. If in fact this handshake deal goes through (expect a public announcement… Read More 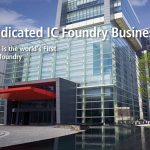 While I was in Taiwan last month battling a Super Typhoon, Morris Chang was in Silicon Valley picking up his IEEE Medal of Honor. Gordon Moore, Andrew Grove, and Robert Noyce all have medals. The other winners, including 10 Nobel prize recipients, are listed HERE. An updated wiki on Dr. Morris Chang is located HERE.