A Look at the PCIe Standard – the Silent Partner of Innovation
by Mike Gianfagna on 07-26-2022 at 6:00 am
View Profile
View Forum Posts

Let’s face it. Standards aren’t always exciting, and the process of ratifying new versions can be time-consuming and tedious. Regardless, we all know standards are the glue that bind many ecosystems and without them the technology world would be good measure more chaotic. Standards come in many versions, with various amounts… Read More 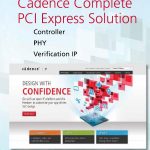 I have been alerted by a blog from Moshik Rubin from Cadence: PCI-SIG has finally released the PCIe 4.0 rev 0.3 specification for members’ review, on time for the PCI-SIG developers conference last June in Santa Clara. Since the early days of PCI Express in 2005, Denali (at that time, now Cadence) has positioned the PCIe VIP… Read More