The transport systems of Science Fiction will be here sooner than you think
by Vivek Wadhwa on 12-22-2016 at 4:00 pm
Categories: Automotive

Picture the commute of the future: You live in Palo Alto, Calif., but work 350 miles away in Los Angeles. After your morning latte, you click on a smartphone app to summon your digital chauffeur. An autonomous car shows up at your front door three minutes later to drive you to a Hyperloop station in downtown Mountain View, where a pod… Read More

Hyperloop: Faster Than the Shinkansen
by Daniel Payne on 12-17-2015 at 4:00 pm
View Profile
View Forum Posts

In 1987 I made my first trip to Japan for business, then rode in my first high-speed train on the fabled Shinkansen (aka bullet train) traveling up to 200 mph on the way from Tokyo to Kyoto. Compared to the USA, our engineering friends in Japan have the most futuristic high-speed trains in the world. Today there’ s talk about another… Read More 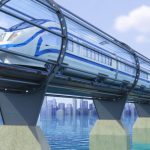 If you follow technology news, it would be hard to deny that we live in exciting times. In some ways there is an unparalleled amount of big and cool technology development going on right now. We all have followed the rise of Tesla Motors. They took over a long vacant US big-auto plant in Fremont and are reinventing the US automobile industry.… Read More