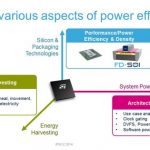 If you have read the white paper recently launched by Dolphin, “New Power Management IP Solution from Dolphin Integration can dramatically increase SoC Energy Efficiency”, you should already know about the theory. This is a good basis to go further and discover some real-life examples, like Bluetooth Low Energy (BLE) chip in … Read More