BitCoin Algorithm
Invented by a mystery person/group with the alias “Satoshi Nakamoto”. [You can read a consolidation of the paper here]. The essential elements are: 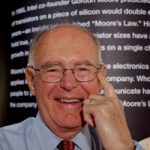 I recently read a news article where the author referred to Moore’s Law as a ‘Law of Science discovered by an Intel engineer’. Readers of SemiWiki would call that Dilbertesque. Gordon Moore was Director of R&D at Fairchild Semiconductor in 1965 when he published his now-famous paper on integrated electronic… Read More