FMS is the best networking opportunity in the storage industry!

The 2022 conference is expanding beyond flash memory to address all forms of high performance memory. Summit organizers welcome your submissions on a range of memory technologies including NAND Flash, DRAM, MRAM, ReRAM, and DNA storage.… Read More

The 3rd Party Semiconductor Intellectual Property (IP) market has seen great innovation in the products it offers to System-on-a-Chip (SoC) designers over the last ten years. If any market segment in the semiconductor industry typifies the intense evolutionary pressures that the entire electronics market has undergone, … Read More 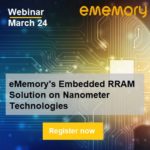 On-chip memory (embedded memory) makes computing applications run faster. In the early days of the semiconductor industry, the desire to utilize large amount of on-chip memory was limited by cost, manufacturing difficulties and technology mismatches between logic and memory circuit implementations. Since then, advancements… Read More

The term von Neumann bottleneck is used to denote the issue with the efficiency of the architecture that separates computational resources from data memory.   The transfer of data from memory to the CPU contributes substantially to the latency, and dissipates a significant percentage of the overall energy associated with … Read More

ReRAM has very attractive characteristics, with one significant limitation:

“AI is the new electricity.”, according to Andrew Ng, Professor at Stanford University.  The potential applications for machine learning classification are vast.  Yet, current ML inference techniques are limited by the high power dissipation associated with traditional architectures.  The figure below highlights the … Read More

Our friends at Threshold Systems have a new class that may be of interest to you. It’s an updated version of the Advanced CMOS Technology class held last May. As part of the previous class we did a five part series on The Evolution of the Extension Implant which you can see on the Threshold Systems SemiWiki landing page HERE. And… Read More