There is an adage that says that quality is not something that can be slapped on at the end of the design or manufacturing process. Ensuring quality requires careful thought throughout development and production. Arguably this adage is more applicable to the topic of Design for Test (DFT) than almost any other area of IC development… Read More 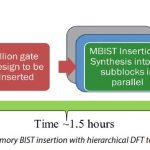 It is pretty common for physical layout to work from a flattened hierarchy for blocks or even full chips, even though the front-end design starts with a hierarchical representation. This was not always the case. Way back when, the physical layout matched the logical hierarchy during the design process. Of course, this led to all… Read More