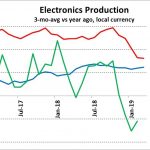 Production of electronics has been accelerating in the last several months, contributing to strong growth in the semiconductor market. China, the largest producer of electronics, has seen three-month-average change versus a year ago (3/12 change) accelerate from below 10% for most of 2016 to 14.5% in April 2017. China’s April… Read More