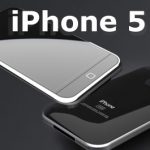 Analysts’ estimates for total iPhone sales in 4Q 2012 are in the range of 46 million to 50 million units.… Read More