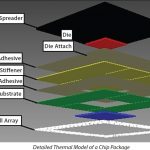 In today’s electronics with multiple functions working together, heat generation is on the rise; sometimes it becomes intolerable. In fact components running at different temperatures can cause timing issues, and very high temperatures can lead to operational issues such as latch-up. An electronic system can contain chips,… Read More