IC Insights’ 112-page May 2Q Update to The McClean Report 2022 is now available for subscribers to download. It includes a current outlook for the 2022 global economy, detailed market, unit shipment, and ASP forecasts for IC and O-S-D products through 2026, 2021 semiconductor supplier rankings by product type, the 1Q22 top-25 semiconductor supplier ranking, an analysis of the IC market by region with additional focus on the China market, semiconductor R&D spending trends, and an overview of various government-sponsored investment programs targeting the semiconductor industry.

Over the past 30 years, the DRAM market has been characterized by periods of spectacular growth and years of devastating crashes (Figure 1). Most recently, the DRAM market fell 37% in 2019 but soared 42% in 2021. No matter the cause—and there are many—boom-bust cycles have lowered the number of major DRAM suppliers from 20 in the mid-1990s to just six today. The three largest suppliers—Samsung, SK Hynix, and Micron—collectively held 94% DRAM marketshare in 2021 (Figure 2). South Korea-based Samsung and SK Hynix accounted for 71.3% of the world’s DRAM sales last year.

With 44% marketshare, Samsung remained the world’s largest DRAM supplier in 2021 with sales that reached nearly $41.9 billion. Samsung advanced its DRAM business on several fronts last year. After being first to use extreme ultraviolet (EUV) lithography in March 2020, Samsung started mass production of 14nm EUV-based DRAM in October 2021. In doing so, it increased the number of EUV layers from two to five on its most advanced 14nm DDR5 DRAM process. 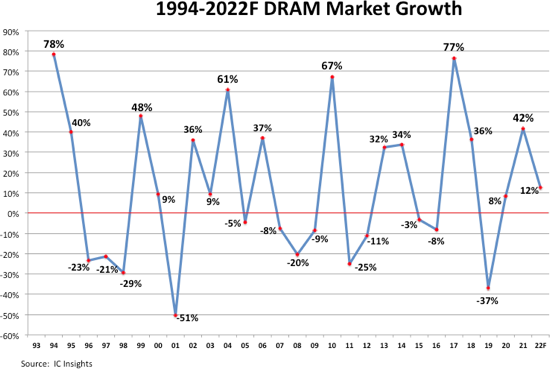 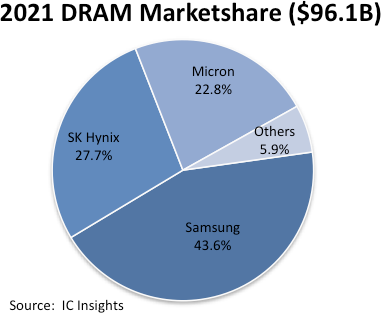 Ranked second and accounting for 28% DRAM marketshare in 2021 was SK Hynix, whose DRAM sales increased 39% to $26.6 billion. DRAM accounted for about 71% of the company’s total 2021 semiconductor sales. Its total DRAM sales were split: server DRAM, 40%; mobile DRAM, 35%; 15% from PC DRAM; and consumer and graphics DRAM each accounted for 5%.

In 2021, SK Hynix released what is claimed was the industry’s highest-performing DDR5 DRAM with data speed capable of transmitting 163 full-HD movies per second. The chip is called HBM3 since it is the third-generation of Hynix’s High Bandwidth Memory.

Micron was the third-largest DRAM supplier in 2021, with sales of $21.9 billion. Micron’s DRAM sales increased 41% and accounted for 23% of global marketshare. On the whole, DRAM accounted for about 73% of Micron’s total calendar year IC sales of $30.0 billion.

In 2021, Micron introduced its 1a nm memory node, which was designed in part to support the data center transition to DDR5 DRAM, driven by new CPU platforms that are expected to begin ramping later this year and gain momentum in 2023. Micron’s 1a nm DRAM is also being applied in low-power communication applications, including 5G smartphones.

Micron manufactures its 1a nm DRAM using a technique that does not require EUV lithography. However, the company has placed orders for EUV equipment and plans to transition to EUV technology to manufacture its DRAM using its 1-gamma (1g) nm node starting in 2024.

Report Details: The 2022 McClean Report
The McClean Report—A Complete Analysis and Forecast of the Semiconductor Industry, is now available. A subscription to The McClean Report service includes the January Semiconductor Industry Flash Report, which provides clients with IC Insights’ initial overview and forecast of the semiconductor industry for this year through 2026. In addition, the second of four Quarterly Updates to the report was released in May, with additional Quarterly Updates to be released in August and November of this year. An individual user license to the 2022 edition of The McClean Report is available for $5,390 and a multi-user worldwide corporate license is available for $8,590. The Internet access password and the information accessible to download will be available through November 2022.

PDF Version of This Bulletin
A PDF version of this Research Bulletin can be downloaded from our website at https://www.icinsights.com/news/bulletins/
F

There might be a cell shape change after 14nm, as the buried word line pitch becomes >50% sidewall liners.

Staff member
Is Micron in line to get some of the CHIPs Act money? And I'm guessing that 5.9% Others is China and Taiwan? Do you know the breakout?
F

Daniel Nenni said:
Is Micron in line to get some of the CHIPs Act money? And I'm guessing that 5.9% Others is China and Taiwan? Do you know the breakout?
Click to expand...