Despite economic troubles brewing this year, total microprocessor sales are expected to maintain double-digit percentage growth in 2022, rising nearly 12% to a record-high $114.8 billion, thanks to higher average selling prices (ASPs), according to IC Insights’ updated second-quarter semiconductor forecast. Total MPU sales grew 13% in 2021 and climbed 16% in 2020, when the Covid-19 virus health crisis wrecked the global economy but also drove up microprocessor demand because of the need for more personal computers, smartphones, and Internet connections in the deadly pandemic.

IC Insights’ 2Q Update to the 2022 McClean Report service shows total MPU shipments rising just 3% this year, which will lift unit volume to an all-time high of nearly 2.5 million processors following increases of 6% in 2021 and 5% in 2020. MPU revenues in 2022 are expected to get a boost from an 8% increase in ASPs after average prices grew 7% last year and 10% in 2020, says IC Insights’ 2Q Update.

Figure 1 shows that the ranking of the top five microprocessor suppliers was unchanged in 2021 compared to 2020, with their combined revenue values of MPUs shipped last year rising 15% to $88.3 billion. 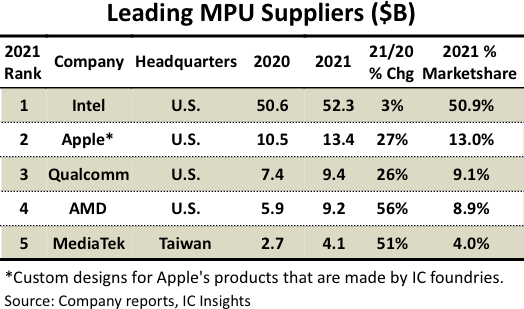 It is important to note that IC Insights’ MPU ranking is based on sales of computer CPUs, embedded microprocessors, and cellphone application processors but excludes co-processors, such as AI/machine-learning accelerators and standalone graphics processing units (GPUs). Many application-specific system-on-chip (SoC) designs with integrated CPU cores are also not counted in the MPU ranking.

While the combined marketshare of top five suppliers has steadily increased in the past 10 years, the revenue gap between long-time MPU leader Intel and the rest of four largest companies in the ranking continues to narrow. IC Insights estimates that Intel’s 2021 microprocessor revenues grew just 3% to $52.3 billion, which was 50.9% of the total MPU market last year, compared to a 55.7% share in 2020 and 58.4% in 2016. Rival x86-processor supplier AMD saw its MPU sales surge 56% to $9.2 billion in 2021, grabbing revenue away from Intel and moving up its total microprocessor marketshare to 8.9% last year compared to 6.5% in 2020 and a woeful 3.3% in 2016 prior to the company’s dramatic turnaround in CPUs for PCs and server computers in the past five years.

Report Details: The 2022 McClean Report
The McClean Report—A Complete Analysis and Forecast of the Semiconductor Industry, is now available. A subscription to The McClean Report service includes the January Semiconductor Industry Flash Report, which provides clients with IC Insights’ initial overview and forecast of the semiconductor industry for this year through 2026. In addition, the second of four Quarterly Updates to the report was released in May, with additional Quarterly Updates to be released in August and November of this year. An individual user license to the 2022 edition of The McClean Report is available for $5,390 and a multi-user worldwide corporate license is available for $8,590. The Internet access password and the information accessible to download will be available through November 2022.