Staff member
TI’s 2019 analog marketshare grew to 19% and ST climbed to fourth place as the top-10 suppliers collectively accounted for 62% of total analog sales..
The 10 largest suppliers of analog ICs collectively accounted for 62% or $34.2 billion of the $55.2 billion analog IC market in 2019. That was an increase of two points from 60% in 2018, according to data compiled and presented in the April Update to the 2020 McClean Report. The update ranked the top semiconductor companies by sales in several major product categories, including DRAM, flash memory, microprocessors, microcontrollers, and analog ICs. Figure 1 shows IC Insights’ ranking of the largest 10 analog suppliers in 2019. 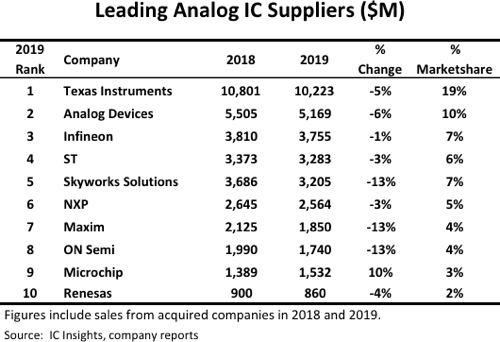 Figure 1
With analog sales of $10.2 billion and 19% marketshare, Texas Instruments held a firm grip on its position as the leading supplier of analog devices in 2019. TI’s analog sales declined by about $600 million compared to 2018 yet it still had more than 10x the sales of tenth-ranked Renesas. TI’s 2019 analog revenue accounted for 80% of its $12.8 billion in IC sales and 75% of its $13.7 billion in total semiconductor revenue.

Ranked in second place was Analog Devices (ADI), which saw its 2019 analog IC sales decrease 6% to $5.2 billion, accounting for 10% global analog marketshare. ADI said its devices, including many of the products it obtained through its 2017 acquisition of Linear Technology, address opportunities “from sensor-to-cloud, DC to 100 gigahertz and beyond, and nanowatts to kilowatts.” Its 2019 sales by end-use application were segmented into industrial (50%), communication (21%), automotive (16%), and consumer (13%).

Each of Europe’s three major IC suppliers—Infineon, ST, and NXP—was a top-10 analog supplier in 2019. Collectively, they accounted for 18% of global analog marketshare, two points more than in 2018. Infineon was the highest ranked European analog supplier (third place) with sales of nearly $3.8 billion. Infineon continues to grow its presence in automotive (44% of 2019 sales) and power management (30% of 2019 sales) applications. Industrial power control (18%) and chip card and security (8%) rounded out its other major end-use applications.

Though ST’s analog IC revenue slipped 3% in 2019, it moved up one position to fourth place in the ranking. ST’s analog sales fell to $3.3 billion (6% marketshare). ST’s analog focus is on motion control (motor driver ICs and high-voltage driver ICs), automation (intelligent power switches), and energy management (powerline communication ICs) applications. One of the key growth areas for NXP is automotive where its analog sales are essential components in emerging systems such as LiDAR, vehicle networks, and 5G. NXP was ranked number six with sales of $2.6 billion (5% marketshare).

Swapping places with ST and slipping into fifth place in 2019 was Skyworks Solutions. After achieving record analog sales of $3.7 billion in 2018, the company’s analog sales fell 13% in 2019. The decrease in sales was partially blamed on the U.S.-China trade war. China was the second-largest regional market for Skyworks’ sales in 2018 and 2019. Many of Skyworks’ customers are manufacturers of smartphones and other communications and computing equipment and have a large presence in China. Despite the downturn, the company accelerated the ramp of its portfolio of new analog chips and chipsets for the launch of 5G smartphones, wireless infrastructure applications, and wireless gaming headsets.

After three consecutive years of double-digit increases in its analog sales, ON Semiconductor saw its analog sales drop 13% in 2019. ON has been the beneficiary of significant growth in auto, industrial, and cloud power applications that have been key drivers for its analog revenue growth the past several years.

Ninth-ranked Microchip was the only top-10 analog supplier to see an increase in its analog sales, which increased 10% to $1.5 billion. Microchip completed its acquisition of Microsemi in May 2018, which helped provide it with a nice boost to full-year analog sales in 2019.

Report Details: The 2020 McClean Report
Additional details on sales rankings for the leading IC suppliers by product type (e.g., DRAM, flash memory, analog, MPU, MCU, etc.) are provided in the April Update to The McClean Report—A Complete Analysis and Forecast of the Integrated Circuit Industry. A subscription to The McClean Report includes free monthly updates from March through November (including the 200+ page Mid-Year Update), and free access to subscriber-only webinars throughout the year. An individual user license to The McClean Report is priced at $4,990 and includes an Internet access password. A multi-user worldwide corporate license is available for $7,990.