Shipments of Wearable Devices Leap to 125 Million Units, Up 35.1% in the Third Quarter, According to IDC

Staff member
FRAMINGHAM, Mass.--(BUSINESS WIRE)--The global wearables market grew 35.1% year over year during the third quarter of 2020 (3Q20) with total shipments reaching 125 million units according to new data from the International Data Corporation (IDC) Worldwide Quarterly Wearable Device Tracker. The surge was driven by seasonality, new product launches, and the global pandemic. New products from the likes of Apple, Samsung, and others helped renew interest in popular categories such as smartwatches and hearables. Meanwhile, consumer spend on electronics also increased during recent months as spending on travel, dining out, and other leisure activities decreased. This shift in spending was another catalyst for the wearables market.

The global wearables market grew 35.1% year over year during Q3 2020 with total shipments reaching 125 million units according to the IDC Worldwide Quarterly Wearable Device Tracker.
Tweet this
Click to expand...

"Many countries began easing restrictions and opening up their economies during the third quarter, which helped bolster outdoor activity as well as demand for wearables," said Jitesh Ubrani, research manager for IDC Mobile Device Trackers. "Meanwhile, a broader range of price points from numerous vendors meant that there was something for everyone."

"The double-digit growth not only indicates strong demand, but also suggests that many people got a wearable device for the first time in both emerging and developed markets," said Ramon T. Llamas, research director, Mobile Devices and AR/VR. "Consider what this means: a larger installed base of wearable device users going forward and a larger opportunity for device replacements in the years to come. And, as some wearers own multiple devices – like earwear and wristwear – the wearables market will enjoy sustained demand."

Apple led the market with 33.1% share during the quarter. AirPods along with Apple Watches were hugely popular due to pandemic driven demand. Apple's expanding Watch lineup also ensured that devices were available at multiple price points including new mid-level products such as the Watch SE.

Xiaomi followed in second place with 17 million units shipped, 12.8 million of which were basic wristbands. The low price point along with international expansion combined to move the company forward with 26.4% year-over-year growth.

Huawei ranked third with unit shipments totaling 13.7 million. Despite facing US sanctions, the company was able to drive growth across multiple markets although its shipments were concentrated in China. Nonetheless, by not relying on Google for its watches and with many components coming from non-US vendors, the negative impact to Huawei's wearables business has been less than in other tech categories.

Samsung's strategy to attack the earwear market with multiple brands continues to pay off as the company ranked fourth in the wearables market. Hearable* shipments reached 8.4 million during quarter along with 2.6 million smartwatches. Bundling of wearables with smartphones continues for the South Korean electronics maker and, at least in smartwatches, the company continues to invest in the commercial segment, a strategy employed by very few smartwatch brands.

Fitbit and BoAt tied for fifth place, each holding 2.6% of the wearables market. Fitbit's new devices launched near the end of the quarter were relatively well received and a price drop on older models has helped the company stay within the Top 5. Meanwhile, BoAt focuses solely on the Indian market (a rapidly growing market for wearables) and primarily sells hearables*. Post-lockdown in India, the company has benefitted from to a strong marketing campaign and tie-ins with local cricket teams. While ambitions remain strong for the company, it lacks the global presence and supply chain of its many competitors. 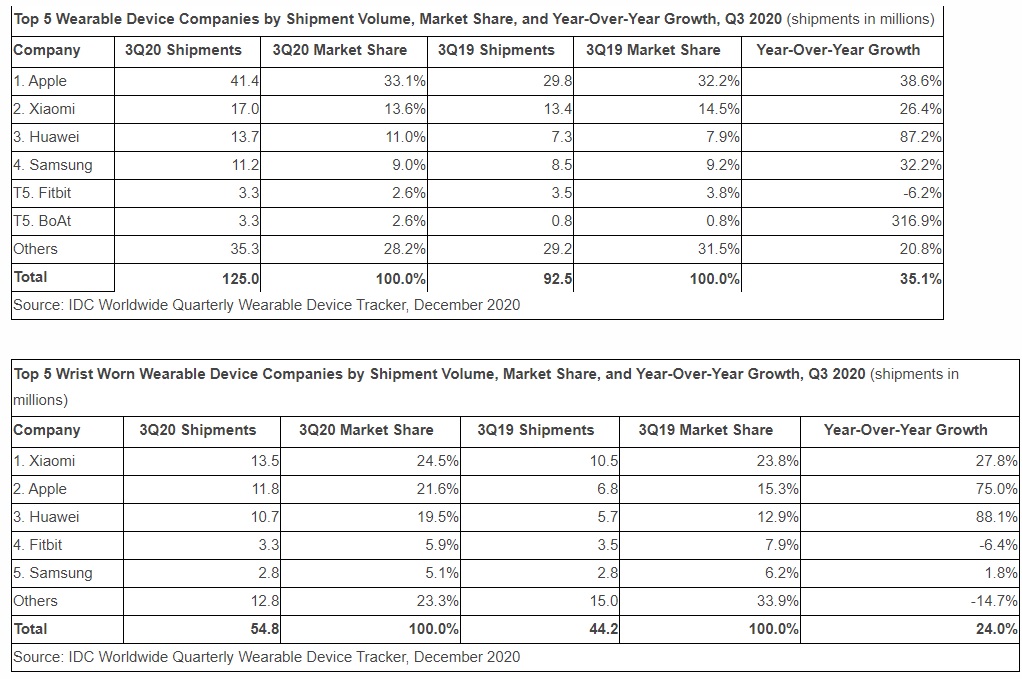 * For an earworn device to be considered a hearable by IDC's definition, it must offer functionality beyond audio, like a smart assistant, health and fitness tracking, or audio experience enhancement.

In addition to the tables above, a graphic illustrating worldwide wearables shipments by product category over the previous five quarters is available by viewing this press release on IDC.com.

Click here to learn about IDC's full suite of data products and how you can leverage them to grow your business.

About IDC
International Data Corporation (IDC) is the premier global provider of market intelligence, advisory services, and events for the information technology, telecommunications, and consumer technology markets. With more than 1,100 analysts worldwide, IDC offers global, regional, and local expertise on technology and industry opportunities and trends in over 110 countries. IDC's analysis and insight helps IT professionals, business executives, and the investment community to make fact-based technology decisions and to achieve their key business objectives. Founded in 1964, IDC is a wholly-owned subsidiary of International Data Group (IDG), the world's leading tech media, data and marketing services company. To learn more about IDC, please visit www.idc.com. Follow IDC on Twitter at @IDC and LinkedIn. Subscribe to the IDC Blog for industry news and insights: http://bit.ly/IDCBlog_Subscribe.

All product and company names may be trademarks or registered trademarks of their respective holders.