IC Insights is currently assembling its 1Q21 top-25 semiconductor supplier ranking, which includes company sales forecasts for 2Q21 that will be presented later this month in the May Update, the third monthly Update to the 500-page, 2021 edition of The McClean Report—A Complete Analysis and Forecast of the Integrated Circuit Industry.

As shown in Figure 1, Intel was locked in as the world’s top semiconductor manufacturer from 1993 through 2016. However, after nearly a quarter of a century, the semiconductor industry saw a new #1 supplier beginning in 2017 when the memory market surged and Samsung displaced Intel. This unseating marked a milestone achievement not only for Samsung, but also for all other competing semiconductor producers who had tried for years to supplant Intel as the world’s largest supplier.

Samsung held the leading semiconductor supplier spot for six quarters before the memory market collapsed in late 2018 and Intel once again became the leading IC supplier in 4Q18 (Figure 2). The memory market plunge was so steep in late 2018 and early 2019 that Samsung went from having 17% more revenue than Intel in 3Q18 to having 18% less sales than Intel just two quarters later. Intel endured its own sales slump in 1Q19, although it was nowhere near the decline exhibited by the memory producers. 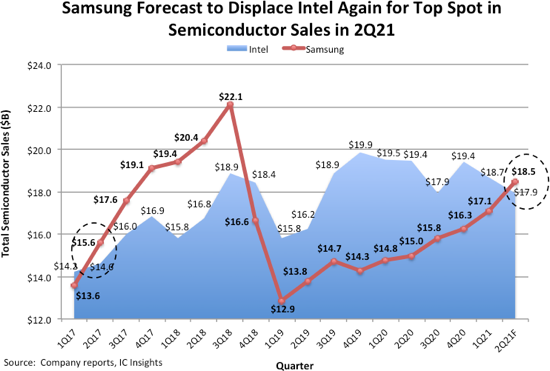 Intel’s revenue rebounded sharply in the second half of 2019 but remained flat throughout most of 2020. Over the span of 10 quarters (4Q18-1Q21), Intel remained the #1 supplier. Meanwhile, Samsung’s semiconductor sales have slowly climbed from the ashes of 1Q19.

Driven by a resurgent memory market and relatively flat sales results from Intel, IC Insights believes that Samsung will again replace Intel as the leading semiconductor producer beginning in 2Q21. Moreover, Intel is guiding its full-year 2021 sales to be down 1% as compared with 2020. With the DRAM market on the rise and the NAND flash market forecast to gain momentum in the second half of the year, it appears likely that Samsung will once again position itself at the #1 semiconductor supplier for the full year as well.

PDF Version of This Bulletin
A PDF version of this Research Bulletin can be downloaded from our website at http://www.icinsights.com/news/bulletins/