DRAM Price Erosion Expected Through the End of 2020

Staff member
Price jump that typically coincides with the introduction of new smartphone models in 3Q and 4Q is not expected due to disrupted buying patterns and cautious discretionary spending.

IC Insights’ October Update to The McClean Report showed the monthly average selling price (ASP) of DRAM started on a steep downward trend in the second half of 2018 that eventually bottomed out at $3.04 in December 2019. DRAM prices rebounded in the first half of 2020 as memory demand grew for personal and enterprise computing systems after the Covid-19 virus forced a rapid and dramatic shift to online-based education, shopping, and business activity. DRAM demand also came from new data center server computers that were needed to handle the surge of online activity. Figure 1 shows that the DRAM ASP climbed to $3.70 in June 2020, before tapering off to $3.51 in July and August this year. 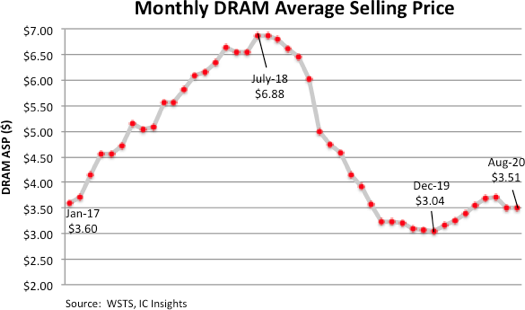 IC Insights now projects modest DRAM price erosion through the end of this year. Although DRAM demand from the computing segment remains healthy, it has stabilized and is not expected to show a marked increase through December. A substantial jump in DRAM demand (and prices) that often takes place in the third and fourth quarters of each year and that coincides with the introduction of new smartphone models, is not likely to be as strong this year due to Covid-19 disrupting typical seasonal buying patterns and consumers being more cautious with their discretionary spending. Several phone makers have already introduced their 5G-capable handsets. Other OEMs are expected to follow suit by the end of December. While total 5G smartphone shipments are expected to reach 200 million units this year, IC Insights does not believe that sales of these leading edge handsets will be enough to catch DRAM suppliers off-guard and create a DRAM supply shortage.

One segment that may provide a boost to DRAM demand late this year is the game console market. Sony and Microsoft will release their new generation game consoles before the end of 2020. Microsoft plans to debut its Xbox Series S and Series X on November 10 and Sony will release its PlayStation 5 (PS5) to select markets on November 12. DRAM suppliers are hoping that demand for the new consoles will offset some of the lost revenue they expect on account of fewer smartphone shipments.

Currently, the big-three DRAM suppliers (Samsung, SK Hynix, and Micron) anticipate softer DRAM sales in calendar 4Q20 and in 1Q21. In Micron’s case, it is banned from selling DRAM to Huawei in China due to trade restrictions that went into effect on September 15, 2020. It is believed that Huawei accounted for at least $500 million in quarterly DRAM sales for Micron, and was the primary reason for Micron’s softer DRAM sales projections for the balance of this year and the first quarter of 2021. There is an outside chance that Micron could be granted a license to sell some of its products to Huawei just as Intel and AMD were granted a license to sell some of their products to the Chinese electronics giant. However, even if granted a license, Micron’s 4Q20 DRAM sales would not likely benefit tremendously since Huawei ordered as much DRAM as it could ahead of the September ban in order to keep its production lines running. It is thought Huawei has about six months of DRAM inventory.

Covid-19 has made it difficult for DRAM suppliers and system OEMs to plan much further out than one quarter as they anticipate sales demand. However, as economic recovery begins and visibility improves, businesses will again be able to make long-range investment decisions. Inventory depletion, a transition to smaller process nodes, ongoing demand from server and PC markets, 5G smartphones shipments that some predict will reach 500 million units in 2021, and other emerging system applications are forecast to provide the DRAM market with strong double-digit growth in each of the next three years.

Report Details: The 2020 McClean Report
Additional details on IC market trends are provided in The McClean Report—A Complete Analysis and Forecast of the Integrated Circuit Industry. A subscription to The McClean Report includes free monthly updates from March through November (including a 180+ page Mid-Year Update), and free access to subscriber-only webinars throughout the year. An individual user license to the 2020 edition of The McClean Report is priced at $4,990 and includes an Internet access password. A multi-user worldwide corporate license is available for $7,990.