IC Insights is in the process of completing its forecast and analysis of the IC industry and will present its new findings in The McClean Report 2020, which will be published later this month. Among the semiconductor industry data included in the new 400+ page report is an in-depth analysis of the IC foundry market and its suppliers.

With the rise of the fabless IC companies in China (e.g., HiSilicon) over the past 10 years, the demand for foundry services has also risen in that country. Figure 1 shows that the China market was the only major region that showed an increase in pure-play foundry sales last year. Moreover, the European and Japanese pure-play foundry markets each displayed a double-digit decline in 2019. 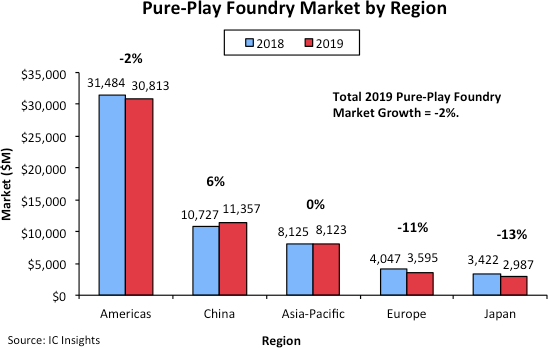 China’s total share of the 2018 pure-play foundry market jumped by five percentage points as compared to 2017 to 19%, exceeding the share held by the rest of the Asia-Pacific region by five points. Overall, China was responsible for essentially all of the total pure-play foundry market increase in 2018. However, in 2019, the U.S./China trade war served to slow economic growth in China and the country’s foundry marketshare increased only one percentage point last year to 20%.

In 2019, Taiwan-based pure-play foundry TSMC stated that about 25% of its 400+ customers are based in China. TSMC and UMC each registered double-digit sales increases to China last year. UMC showed the highest sales increase into China with a 19% jump. This increase was driven by the continued ramp up of its 300mm Fab 12X located in Xiamen, China, which opened in late 2016 and has a current capacity of about 22.7K 300mm wafers per month. In contrast, it appears that many of China-based SMIC’s Chinese customers encountered slow business conditions. SMIC’s 2019 sales in China dropped by 8% as compared to a total company sales decline of 7% last year.

PDF Version of This Bulletin
A PDF version of this Research Bulletin can be downloaded from our website at http://www.icinsights.com/news/bulletins/

Staff member
Let's not forget that China consumes more than 50% of semiconductor production worldwide and they only produce about 20% of said chips. The China semiconductor disruption is coming, absolutely.
D

I have a question for you Daniel; isn't much of China's semiconductor "consumption" assembled into products which are then exported (like iPhones)? If so, won't this consumption percentage drop if these products start being assembled in other countries (like India or Vietnam)? I understand that Samsung is moving their cell phone production out of China.

Staff member
Yes that is true. Less now than before however. China manufacturing is not as cost competitive as before.

Apple and Samsung are being squeezed out of the China market by the Chinese handset makers (Huawei, Oppo, Vivo, etc...) so they do not need to manufacture in China anymore.

For the mobile market the semiconductors are not Chinese, they are mostly from TSMC and Samsung. That may change once China has memory in mass production but leading edge logic will always be TSMC or Samsung. And remember, Foxconn the largest electronics manufacturing company that makes Apple phones is a Taiwanese company, not Chinese.

Moving forward the China consumer market is the fastest growing so that is what most people are talking about in regards to disruption. Tesla is making cars in China now which is a good move.