Register / Log In
Guests have limited access.
Join our community today!
You are currently viewing SemiWiki as a guest which gives you limited access to the site. To view blog comments and experience other SemiWiki features you must be a registered member. Registration is fast, simple, and absolutely free so please, join our community today!
Wiki Index » Company Wikis

As a leader in large-scale and high-performance circuit simulation, advanced device modeling and semiconductor parametric testing, Primarius is committed to deliver innovative EDA solutions to tighten the linkage between advanced process development and high-end chip designs.

Primarius was founded in 2010 by a group of industry veterans, and has seven worldwide offices in Beijing, Hsinchu, Jinan, Seoul, Shanghai, and Silicon Valley. Primarius is well recognized as an essential EDA partner for advanced process technology development and high-end chip designs. It has over 100 worldwide customers including all top foundries and tier-one memory houses, and most other leading semiconductor companies.

Primarius has the mission to provide world-class EDA products, and drive technology innovations for the industry. It is devoted to building a unique memory EDA flow and an innovative EDA solution from data to simulation, that enables efficient Design Technology Co-Optimization (DTCO) in real engineering practices during technology development and chip design at advanced process nodes.

Consistence in innovation and Pursuit of Excellence

In September 2020, offices in Beijing, Shanghai and Ji’nan sites moved to new spaces.

In August 2020, EDA offerings in memory design are well recognized by world leading IDM and design houses, and we are engaging more customers.

In May 2020, AI-driven automatic model extraction platform, SDEP was adopted by a world-leading IDM.

In March 2020, completed a hundreds-of-millions-of-Yuan Series A round of financing jointly led by Intel Capital and Xingcheng Capital.

In 2019, build up a comprehensive EDA solution from data to simulation.

In Nov 2019, NanoSpice family was adopted by a leading IDM and a top design house in China.

In Jan 2018, AI-Driven parameter tester, FS-Pro was released and adopted by many leading semiconductor companies and research institutes.

In 2016, 9812DX was launched, setting up an absolutely goden standard for low-frequency noise measurement.

In 2015, ME-Pro was introduced as the first platform enabling interactive analysis between device and circuit.

In 2014, Nanospice Giga, the first Giga parallel SPICE simulator, was presented as a great substitute for traditional SPICE and FastSPICE simulators.

In 2013, NanoSpice, a new generation of parallel circuit simulator, was offered and its first customer Omnivision applied it in production.

In 2013, 9812D, the first noise measurement system integrating high-performance dynamic signal analyzer, was launched as a new benchmark in the industry.

In 2013, NanoYield was adopted by SMIC for SRAM yield improvement in the development of advanced process platform.

In 2011, NanoYield, the first fully integrated yield-oriented design tool, went to the market.

In 2010, established by Dr. Zhihong Liu and other industry veterans in China. 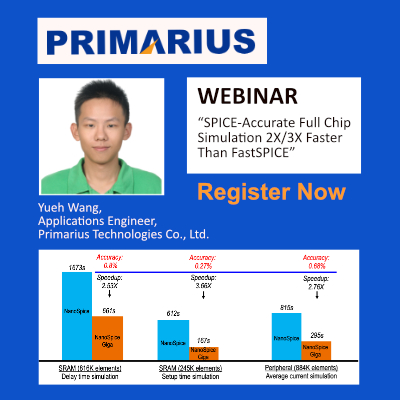