On May 15th TSMC “announced its intention to build and operate an advanced semiconductor fab in the United States with the mutual understanding and commitment to support from the U.S. federal government and the State of Arizona.”

The fab will run TSMC’s 5nm technology and have a capacity of 20,000 wafers per month (wpm). Construction… Read More

Can TSMC Maintain Their Process Technology Lead
by Scotten Jones on 04-29-2020 at 10:00 am
View Profile
View Forum Posts

Recently Seeking Alpha published an article “Taiwan Semiconductor Manufacturing Company Losing Its Process Leadership To Intel” and Dan Nenni (SemiWiki founder) asked me to take a look at the article and do my own analysis. This is a subject I have followed and published on for many years.

Before I dig into specific process density… Read More

I couldn’t attend the SPIE Advanced Lithography Conference this year for personal reasons, but last week Mike Lercel of ASML was nice enough to walk me through the major ASML presentations from the conference.

I wasn’t able to attend the SPIE Advanced Lithography Conference this year for personal reasons, but Applied Materials was kind enough to set up a phone briefing for me with Regina Freed to discuss their Materials-Enabled Patterning announcement.

I have had very interesting discussions with Imec researchers… Read More 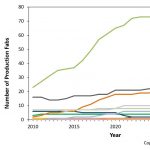 Unless you are new to SemiWiki you should be familiar with Scotten Jones, founder of IC Knowledge, semiconductor process expert, and blogger extraordinaire. Scott joined SemiWiki in 2014 and has been blogging ever since with 130 posted thus far.